I have been reading an old book I found in a used bookstore. The book, A Treasury of the Essay moves chronologically, starting with, predictably, Michel de Montaigne, who is credited with popularizing the essay as a genre, and then through the centuries, including a whole host of European and American essayists, some to me fairly familiar, such as Jonathan Swift and Virginia Woolf, and others less so – William Cobbett and James Thurber for example.

We’re treated to excerpts of essays in a wide assortment of styles. I have enjoyed some and been bored by many.

And by a few, I’ve been pleasantly surprised. There is only one essay included by Benjamin Franklin. It is found in a letter to a lady – and reads a bit like a children’s story. I found it whimsical, captivating, and so very unexpected.

Find in the below a gentle reminder of one’s smallness in the universe, the shortness and transience of life, and the importance then of not taking ourselves and our own importance too seriously.

You may remember, my dear friend, that when we lately spent that happy day in the delightful garden and sweet society of the Moulin Joly, I stopt a little in one of our walks, and staid some time behind the company. We had been shown numberless skeletons of a kind of little fly, called an ephemera, whose successive generations, we were told, were bred and expired within the day. I happened to see a living company of them on a leaf, who appeared to be engaged in conversation…I turned my head to an old grey-headed [fly], who was single on another leaf, and talking to himself. Being amused with his soliloquy, I put it down in writing…

“It was,” said he, “the opinion of learned philosophers of our race, who lived and flourished long before my time, that this vast world, the Moulin Joly, could not itself subsist more than eighteen hours; and I think there was some foundation for that opinion, since, by the apparent motion of the great luminary that gives life to all nature, and which in my time has evidently declined considerably towards the ocean at the end of our earth, it must then finish its course, be extinguished in the waters that surround us, and leave the world in cold and darkness, necessarily producing universal death and destruction.

I have lived seven of those hours, a great age, being no less than four hundred and twenty minutes of time. How very few of us continue so long! I have seen generations born, flourish, and expire. My present friends are the children and grandchildren of the friends of my youth, who are now, alas no more! And I must soon follow them; for, by the course of nature, though still in health, I cannot expect to live above seven or eight minutes longer.

What now avails all my toil and labor, in amassing honey-dew on this leaf, which I cannot live to enjoy! What the political struggles I have been engaged in, for the good of my compatriot inhabitants of this bush, or my philosophical studies for the benefit of our race in general!…My friends would comfort me with the idea of a name they say, I shall leave behind me; and they tell me I have lived long enough to nature and to glory. But what will fame be to an ephemera who no longer exists? And what will become of all history in the eighteenth hour, when the world itself, even the whole Moulin Joly, shall come to its end, and be buried in universal ruin?”

To me, after all my eager pursuits, no solid pleasures now remain, but the reflection of a long life spent in meaning well, the sensible conversation of a few good lady ephemerae, and now and then a kind smile and a tune from the ever amiable Brilliante.

I found this a welcomed jolt of perspective that is just as useful to us now as it was in Benjamin Franklin’s day.

I was reminded while reading this of the classic Cosmos by Carl Sagan. In fact, in Cosmos is a line strikingly similar in sentiment, “We are like butterflies who flutter for a day and think it is forever.”

For some additional detail and the full text of Benjamin Franklin’s letter, click here. 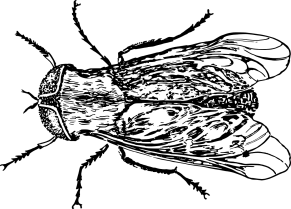